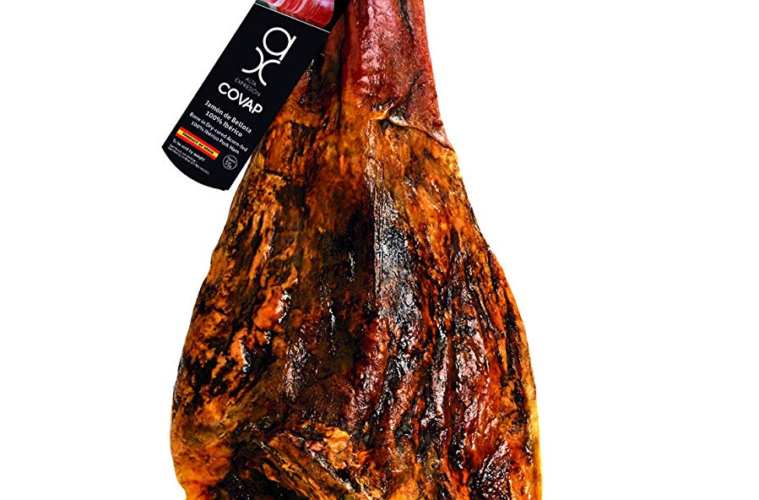 Pork perfection ain’t cheap. This side of acorn fed 100% Iberico de Bellota Ham weighs in at 16 to 18 pounds of pure cured meat delight. As with most large-scale Iberico Ham purchases, this piggy buddy also comes with a wood and stainless steel ham holder and knife, both doubling as utilitarian slicing wingmen and crowd-pleasing display pieces.

Jamón is the national culinary treasure of Spain. The incredible cured ham made from free-range, acorn-fed pork, is the ultimate of its kind. Cured for over two years, thin slices of this ham provide with beneficial fats that are the key to its profound, complex flavor., is known as the elite brand of Ibérico ham. The hams come from an ancient breed of pig, Cerdo Ibérico, which has been roaming the woodland meadows of western Spain feeding on acorns for thousands of years. Jamón Ibérico de Bellota is the pride of Spain, and Spaniards consume the vast majority of the limited number of hams produced in their own country.

There they feast upon acorns which are falling in abundance from the holm oak and cork trees. They feast on these ‘bellotas’ (Spanish for acorn) themselves, putting on at least two pounds of weight each day! When it is time for their sacrifice (the Spanish term for slaughter), these genetically unique animals produce Jamón Ibérico de Bellota hams that are marbled with rich golden fat infused with the flavor of the sweet bellota acorns. Remarkably, a good portion of which is mono-unsaturated, similar to healthy olive oil.